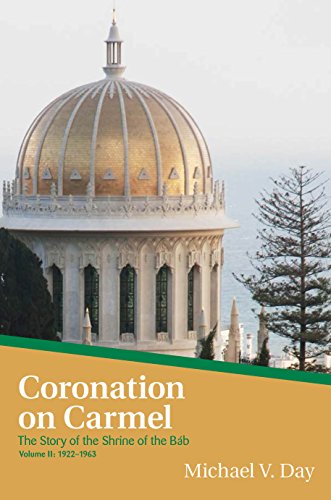 Titulo del libro: Coronation On Carmel: The Story of the Shrine of the Báb Volume II: 1922–1963

Continuing the thrilling story of the Shrine of the Báb, this volume covers the building of the superstructure of the ‘Queen of Carmel’.

A drama opens on Mount Carmel in Haifa in the Holy Land in 1922.

The new head of the Bahá’í Faith, Shoghi Effendi, begins the project to complete the Shrine of the Báb by building a domed superstructure. Aged only 24, he is faced with an almost impossible task. He has nowhere near enough money, no competent assistants, no building experience.

Undaunted by the challenge, Shoghi Effendi toils towards his goal through decades of upheaval and opposition. As time moves on, he gathers support from the growing Bahá’í community worldwide, and particularly from his wife, who becomes his tireless collaborator; an eminent Canadian architect; an Italian nobleman; a selfless donor; a Haifa construction engineer; a can-do American project manager he nicknames ‘Hercules’; and an Arab called ‘The Man with the Golden Touch’.

This is an inspiring, thrilling story that also includes the only woman known to have held the reins of a world religion, a member of European royalty whose pilgrimage is thwarted, and a pioneer female photographer.

In 1953 Shoghi Effendi unveils to the world the golden-domed Shrine of the Báb on Mount Carmel, set amidst gardens of a mystical charm. He names the Shrine ‘Queen of Carmel’.

This true story follows Journey to a Mountain (1850–1921), the pulsating description of the transfer of the sacred remains of the Báb from Persia to the Holy Land, and their interment in the Shrine built by ‘Abdu’l-Bahá.